Description (from the publisher):

A Saskwyan flight mechanic with uncanny luck, seventeen-year-old Robin Arianhod grew up in the shadow of a decade-long war. But the skies are stalked by the Coyote—a ruthless Klonn pilot who picks off crippled airships and retreating soldiers. And as the only person to have survived an aerial dance with Saskwya’s greatest scourge, Robin has earned his attention.

As a pilot, Robin is good. But the Coyote is better. When he shoots her down and takes her prisoner, Robin finds herself locked into a new kind of dance. The possibility of genuine affection from a man who should be her enemy has left her with a choice: accept the Coyote’s offer of freedom and romance in exchange for repairing a strange rocket pack that could spell Saskwya’s defeat, but become a traitor to her country. Or betray her own heart and escape. If she takes the rocket pack and flees, she could end the war from the inside.

All she has to do is fly. 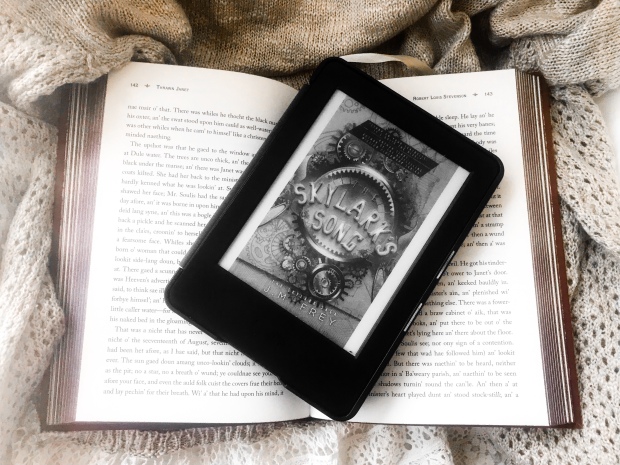 Thanks to NetGalley and the publisher for a copy of this book.

Sometimes, I judge a book’s quality by how quickly I read it. Usually, this is a good thing: it means I was absorbed in the story, that it was a page turner. The Skylark’s Song was an exception to this rule. I read it quickly not because I was absorbed in the story but rather because I wanted to get it over with. And quite honestly, had I not requested this book on Netgalley, I wouldn’t have finished it.

I requested The Skylark’s Song because it sounded interesting. Robin is just a flight mechanic, but somehow she earns the attention of the notorious fighter pilot called the Coyote. When he takes her as his captive, she finds herself faced with a difficult choice: follow her heart and stay with him, or escape to return to her country.

Unfortunately instead of being a fun read, it was a painful one.

The writing was hard to get through. I found myself skipping over paragraphs because I thought it was just too cheesy.  I’m not even sure what made it cheesy. Sure, I have a lot of pet peeves. “Wry smile” (ugh), “golden skin” (what does that even mean?), characters constantly “scowling”.  And the dialogue was just gross.  The Coyote said. “my dear” ALL the friggin’ time, and the mean kids pretty much called Robin a worthless Sealie, which felt more like over-the-top bullying than real prejudice.

But I can sometimes forgive bad writing (see my obsession with A Court of Thorns and Roses…Sorry, Sarah). I can forgive it when essentially everything else is good. Unfortunately, that was not the case with The Skylark’s Song.

The characters did not feel real. Robin was stubborn and strong, but really these were just the character traits the author assigned her. She had no personality. And the Coyote was just another Bad Boy who was insta-in-love with Robin. Really, it’s hard to write about characterization when there isn’t much there.

There was also a poorly executed attempt at world building. I understood there was a war, but I never really understood why. Was it just because flying around and shooting people is “cool”? ‘Cause that’s the vibe I got. I also didn’t understand what being a Sealie meant. I get that it’s a religion , but like what does that entail? And then there’s the whole prejudice against the Sealie. I didn’t understand why it existed. Of course, racism/prejudice doesn’t ever have a good why, but there has to be something to it, right? Fear? Misunderstanding? Stereotypes? You’ve gotta give me something.

And the actual story? Well, I mean I guess it was there.

Ultimately, this isn’t a book I would recommend. Sure, there might be a few readers out there for it, but I’m not one of them. If you want something cheesy (and I get it–sometimes I do too), this might fill that need. Other than that….No thanks.

2 thoughts on “The Skylark’s Song by J.M. Frey, A Space-Age Forbidden Romance”