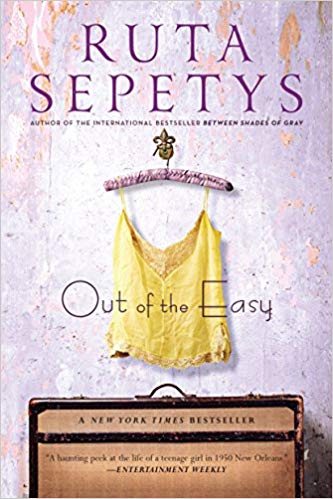 Title: Out of the Easy

Description (from cover):It’s 1950, and as the French Quarter of New Orleans simmers with secrets, seventeen-year-old Josie Moraine is silently stirring a pot of her own. Known among locals as the daughter of a brothel prostitute, Josie wants more out of life than the Big Easy has to offer. She devises a plan get out, but a mysterious death in the Quarter leaves Josie tangled in an investigation that will challenge her allegiance to her mother, her conscience, and Willie Woodley, the brusque madam on Conti Street.

Josie is caught between the dream of an elite college and a clandestine underworld. New Orleans lures her in her quest for truth, dangling temptation at every turn, and escalating to the ultimate test.

With characters as captivating as those in her internationally bestselling novel Between Shades of Gray, Ruta Sepetys skillfully creates a rich story of secrets, lies, and the haunting reminder that decisions can shape our destiny. 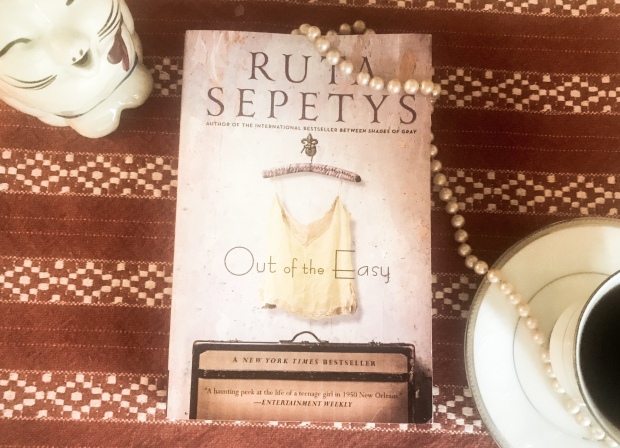 Growing up as a prostitute’s daughter isn’t easy, and all Josie Moraine wants to do is leave that title behind. She has one dream: get out of the French Quarter and go to college. But just as things start to work out, a man winds up dead and Josie finds herself at the center of the investigation.

Josie Moraine is different from many young adult protagonists, but she felt like a real teenager. She isn’t a “kick-butt heroine”, and she isn’t always strong.  Sometimes she’s fragile, and sometimes she’s desperate. And she’s definitely flawed. At times, I felt frustrated with her. She’s ashamed of who she is, and at times, she’s ashamed of the people who love her. She’s selfish and doesn’t think about how she might be hurting others, and she makes stupid decisions.

Initially, I struggled to relate to Josie. I thought she was annoying. But as the book progressed, I realized that she was more “real” than other characters I’ve encountered. It was this realness that made her endearing.

The book was also engaging. Even though I had a good idea of who “done it”, the twists at the end were still surprising. After all, this isn’t really about the murder. This is about growing up and learning to deal with hardship. So in this case, figuring out the mystery early on doesn’t make the book predictable. It just makes sense.

Even though I enjoyed this book, I struggled with the writing. I felt like the dialogue was a little inauthentic because it seemed like Sepetys was trying too hard to make you feel like this took place in the 50’s. This mostly popped up with Jesse, a boy around Josie’s age. He felt like he was ripped out of a 1950’s movie, more like a cliche than a real person.

One thought on “Review: Out of the Easy by Ruta Sepetys”