“Remember, it’s only a game…

Scarlett Dragna has never left the tiny island where she and her sister, Tella, live with their powerful, and cruel, father. Now Scarlett’s father has arranged a marriage for her, and Scarlett thinks her dreams of seeing Caraval—the faraway, once-a-year performance where the audience participates in the show—are over.

But this year, Scarlett’s long-dreamt-of invitation finally arrives. With the help of a mysterious sailor, Tella whisks Scarlett away to the show. Only, as soon as they arrive, Tella is kidnapped by Caraval’s mastermind organizer, Legend. It turns out that this season’s Caraval revolves around Tella, and whoever finds her first is the winner.

Scarlett has been told that everything that happens during Caraval is only an elaborate performance. Nevertheless she becomes enmeshed in a game of love, heartbreak, and magic. And whether Caraval is real or not, Scarlett must find Tella before the five nights of the game are over or a dangerous domino effect of consequences will be set off, and her beloved sister will disappear forever.

Welcome, welcome to Caraval…beware of getting swept too far away.”

I was initially attracted to this novel because of its cover, but I also have a new fascination with stories that are set in magic carnivals or circuses. But this one was more intriguing because instead of watching the show, participants are part of the show. And in terms of young adult fiction, this one seemed like it was more focused on the relationship between two sisters rather than romance.

After reading a bunch of stuff I didn’t enjoy, this was the book that got me excited about reading again. Before this one, I had started a bunch of different novels that I could never really get into. It was nice to find one that truly pulled me in and didn’t feel like a chore.

Caraval is a magical page-turner. It was fast –paced and different.  But ultimately, it appealed to  my imagination.

But more importantly, the world was vivid. I could picture everything perfectly, from the characters to the setting to the dresses. There was this constant mystery to everything, and  much like Scarlet, I was trying to distinguish was real and what was an illusion. But that was part of the magic because I was as much part of the mystery as Scarlet.

Scarlet and Julien were both interesting and complex characters. Scarlet’s inner conflict between her duty to her sister and her own desires made her feel like a real person. Julien’s secretiveness was intriguing. And then there’s the whole mystery behind Legend—and hopefully in the sequel we will learn more because out of all the characters, Legend is the most alluring. 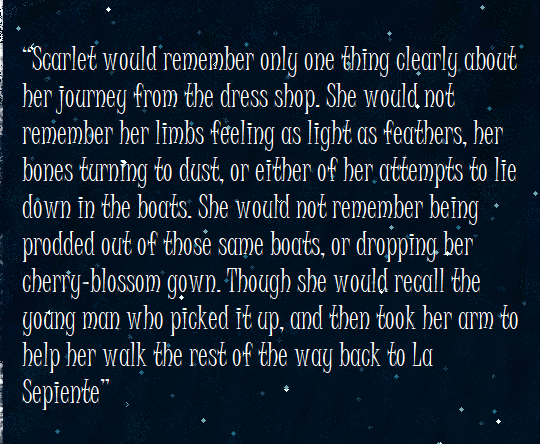 I also enjoyed the narration. For the most part, Caraval is written in third-person limited. But it almost felt like a voice-over at times, and instead of that being a negative, it only added to magic.

Scarlet and Tella’s father is abusive, but it felt more like he was an over-the-top villain than realistic abuser. I couldn’t quite place it, but it didn’t ever feel natural. I never felt real concern for Scarlet or Tella, nor did I ever feel any emotion that I should have felt given their circumstances. Instead, it felt like Garber’s intent was to make you/Julien/others feel “sorry”for them, like it was a way to get us to root for the.

But besides those two things, I enjoyed Caraval and I plan on reading its sequel when it comes out. Overall, Garber’s world was magical, her writing enchanting, and her characters endearing.

9 thoughts on “Caraval by Stephanie Garber”